The Miramichi Agricultural Exhibition Association Limited was organized by a group of interested farmers and businessmen and was incorporated in 1903. The charter was signed by Mr. L. J. Tweedie, Provincial Secretary, by command of the Lieutenant Governor, The Honourable Jabez Bunting Snowball.

The organizers and provisional directors were:

This group of men, who arranged for the erection of a building, which was to collapse later under heavy gales, started the plans for the Exhibition Building in 1902. The next building was erected following the signing of the Charter, which took place on March 12, 1903.

This second building was to survive until 1937, when shortly before the annual exhibition; flames engulfed and destroyed the stately structure.

The Board of Directors then made a very important decision. They realized the tremendous amount of work, which had already gone into the preparation of the 1937 Miramichi Exhibition, not only by themselves but also by the many exhibitors who would have had their exhibits prepared. They decided to erect temporary buildings and improvise with those not destroyed by fire so they could carry on with the annual event.

The exhibits arrived; the official ceremony took place; the judging was completed; and the crowds mingled in the midway with the smell of smoke in the air and the ruins of many years of dedicated work in full view.

The Board of Directors, however, was not to be discouraged. For the third time, plans were made for an Exhibition Building and the program of reconstruction began. After completion, the building was used for many years before it was further extended, both east and west, to occupy the entire width of the Exhibition Property. The building stretched a distance of 343.41 feet from Lobban Avenue on the east side, to John Street on the west side. 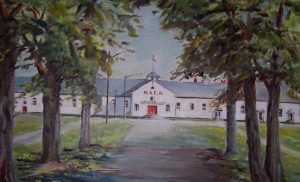 This structure, situated atop the hill overlooking the beautiful Miramichi River, became known as the Main Exhibition Building. The immense structure was crowned with a distinctive red steel roof it was impeccably maintained and extensively renovated throughout the years. It stood as one of the community’s landmarks until April 16, 1993, when fire engulfed the stately structure and destroyed the entire complex.

This Main Exhibition Building consisted of three main sections. Located on the east end of the structure was the L shaped section, which housed the Curling Club ice surface and clubrooms. It was constructed in 1965, primarily to provide extra booth space for, the annual Exhibition.

In 1967, just shortly after erecting the Curling Club, the building collapsed during the curling season. Fortunately, no one was injured. The Ladies Curling Club later honoured Wib Jardine for saving their lives. Wib had refused to let the ladies go on the ice to curl as he had heard some unfamiliar noises when preparing the ice earlier in the morning.

His concern was instrumental in averting what may have been a terrible disaster. All concerned will always be grateful to Wib! The building was reconstructed shortly thereafter and continued to provide curling facilities for the Chatham Curling Club until 1992.

Located at the west end of the Main Exhibition Building was the Pavilion or the Dance Hall. The Pavilion was used extensively throughout the years as a venue for entertainment, weddings, dances, binges, fashion shows, and other special community events.

Extreme adversity had faced the founders and directors of the Miramichi Agricultural Exhibition Association Limited in the past. As a tribute to their dedication, the President and Board of Directors made the decision in the spring of 1995 to begin construction of a new Exhibition facility.

Phase I of the reconstruction was completed for the 1995 Miramichi Exhibition. JW Lindsay Enterprise Limited of Moncton constructed a 9,000 square foot facility. This fully air conditioned structure seats up to 600 people and is used for entertainment, weddings, dances, and other special community events. The first official event that took place in the Exhibition Pavilion was the 1995 Miss Miramichi Pageant. During Exhibition Week, the Pavilion is used as an entertainment venue and also houses a lively casino featuring blackjack and roulette.

Other Buildings and Improvements

Property owned by the Miramichi Exhibition extends a distance of 2462.2 feet from north to south from Church Street to St. Thomas Street.

Repairs to the Napke Building, including a new red steel roof and completely renovated public washrooms were completed in 1988. In 1991, new showcases were constructed for the display of baked goods. In keeping with making buildings more accessible to the disabled, a new concrete wheelchair ramp and steps were installed.

In 1993, after fire had destroyed the Main Exhibition Building, the Association no longer had a venue to hold its weekly bingos. It was decided to convert the Napke Building to meet this need. As a result, the building was again completely renovated. A new tile floor was laid; a canteen was built, and new walls, windows and doors were installed. The hall was wired with a new PA sound system and an air exchanger was installed for the comfort of patrons. New tables and chairs were purchased to complete the renovation package. In 1999, new tables were once again purchased for the Napke Building.

On the second floor of one of the horse barns known, by old time fair goers as the “Jersey Barn”, is the Red Rooster Lounge & Casino. In 1989, a new red steel roof was installed on this building. Then in 1991, the facility underwent extensive renovations. A distinctive red and white tile floor was installed; a cashier’s office was constructed; and lighting was improved. In 1999, six new blackjack tables were built for the Rooster. During the annual Exhibition, nightly entertainment featuring local artists that add to the lively atmosphere of the Red Rooster Lounge & Casino.

The little Log Cabin with the red roof was completely renovated for the 1996 Exhibition. The Log Cabin has a concrete patio with a new roof built over it and has been landscaped to add to its appearance. Also new that year was the construction of wheelchair accessible public washroom facilities, which are located just south of the Log Cabin.

On July 24, 1986, the Exhibition’s Grandstand was destroyed by fire. The Grandstand was some thirty years old; had seated 500 patrons; and was once used as a canteen area. It had housed the pari-mutuel betting windows for horse-racing events. The last horse- racing event was staged in 1982, and from then on the Grandstand had been used as a seating area for horse hauling events and other outdoor shows.

Following the destruction of the Grandstand, open-air bleachers were built in 1987. The bleachers were erected in the area immediately south of the three cattle barns. Also in this area is the judges’ stand. This area of the property, known as the Show Ring, is used for such events as the 4-H judging. A stairway leading from the midway area between Cattle Barn #2 and Cattle Barn #3 enables patrons easy access to the Show Ring. Also in 1987, new fencing was installed around the entire midway area. In 1988, new and improved lighting was installed for the Barn / Show Ring area.

Further south is the trailer hook up area used by exhibitors and midway personnel. A building in this area has also been renovated for storage. The remaining property south to St. Thomas Street (the old race track property) has been levelled and is now to be used for parking. In 1989, the new Show Ring lighting was extended to include the south parking lot. This expensive, but worthwhile lighting provides visitors, neighbours, and this facility with an added sense of security, not only during the fair week, but during the remainder of the year as well. 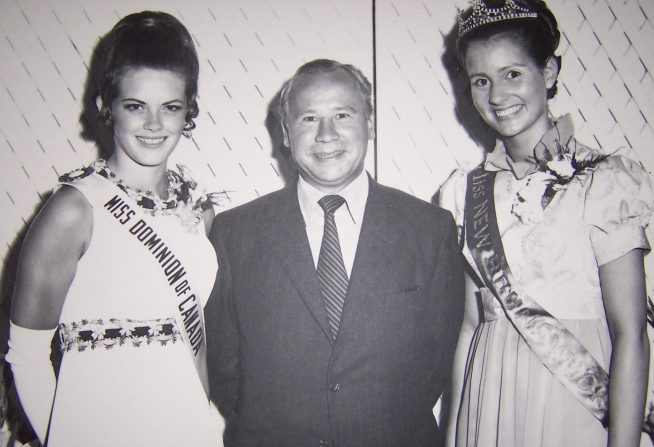 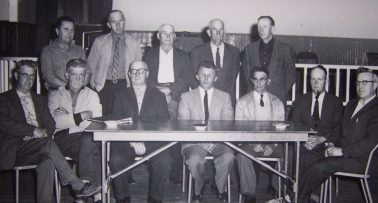 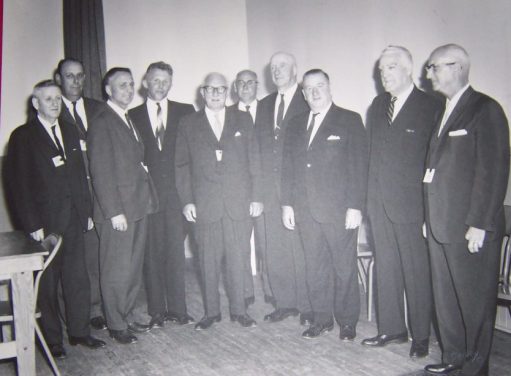 There are three entrances into the Exhibitions Grounds. These ticket booths and entrances are conveniently located around the perimeter of the property. To the north is the Main Entrance gate, situated between the Exhibition Pavilion and the Trade Show Buildings. In 1998, new ticket booths were built for the Main Entrance. At the opposite end of the property is the South Gate Entrance, situated in the southwest corner of the Exhibition Grounds. This entrance is located handy to the south end parking lot. In 1991, renovations were made to the South Gate Entrance to include an extra ticket booth. To the east is the Lobban Avenue Entrance, which was situated as a convenient entrance for visitors from Mount St. Joseph.

Visitors to the 2020 fair will note that no expense has been spared in preparing the grounds and facilities. Without question, the fairgrounds here at the Miramichi Exhibition are the “cleanest in the east”. After a visit to the fair we are sure you would agree!

Photos from the Past 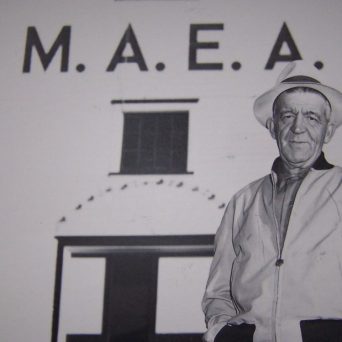 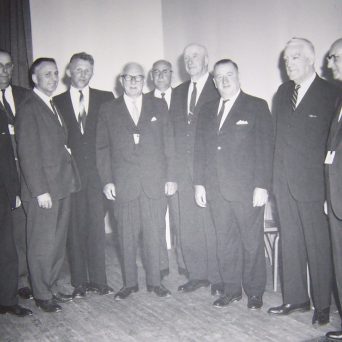 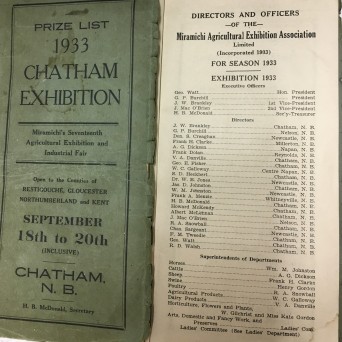